A Shihō is a technique exercise. Origin and meaning of the word Shihō: the word appears in the Japanese imagery Kanji (ideograms taken from Chinese) written as above right. The first sign,four, is Shi and stands for the number "four". The second sign,One , is Hou and means "direction". This last sign is actually a simplification of 方向 (houkou, also "direction"). In Japanese syllables (Hiragana en Katakana) Shihō is written as し ほ う. These are three syllables: shi-ho-u, so with a u! But why don't we write Shihou?
New, that's the way it is: in Japanese the combination ho + u is pronounced hòò, just like in "Holland", maar ‘ho’ pronounced a little longer. In Romaji (this is simply the Japanese word for our own Latin script) this is usually written as hoo. In the Hepburn System (a system in which the rules of Romaji are laid down) it has therefore been agreed that the combination o-u must be written as ō or in the simplified version oo.
You should also know that words with a "short’ o get a different meaning. Thus hō means (of hoo) "Direction", maar ho (so with one o) means "sail". The single o is pronounced like the o in Holland, short and sweet. The double o (of ō) is pronounced the same but held a little longer. So the correct pronunciation of Shihō is "shie-hòò". Note also the "h" sound in the middle, don't say "shio", for that means "salt’ in Japanese! And of course we don't take karate with a grain of shio…
Note also the interchangeability with the word "ushiro". This means something like turning around. Sometimes "shihō" is incorrectly used here’ for used… 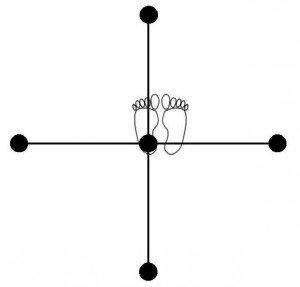 Enough about the origin and spelling, now to the Shihō itself:
A Shihō is a technique exercise in which defense, bump- and pedaling techniques are performed in four directions (So Shihō means "four directions’ in Japanese). For example, Shihō Tsuki means "four-way punching techniques". Shihō Uke-Zuki also includes a defense technique (e.g. Gedan-bars), then for example two punches (Gyaku-zuki en Oi-zuki), after which it is turned 180 ° to the right, again the defense and the same two punches and then is turned 90 ° to the left. Only the right foot is always moved. The left foot is always turned (changed direction). The left foot does not come out of position, except for performing stairs (however, there are also exceptions, like the Shihō Kuzushi). The stairs- and / or punching techniques are repeated over and over in each direction, until the original position is reached again.

A Shihō can be performed in many ways, after all, it is a technique exercise. But there are also Shihō, who, like Kata, have a name. All movements are therefore recorded in this. Within Gensei-Ryu, Shihō are very important. Actually just as important (maybe even more important!) as a kata. Some important Shihō are described below (click on the links). Some Shihō have Heisoku-dachi as a starting position and some have to go from there to Heiko-dachi. In that case the right foot is always moved, because as said above, the left foot does not come out of position. In principle, the final position is always Heisoku-dachi, without going to Heiko-dachi first.
To be the Shihō practiced at Genseiryu:
Shihō (Week-)Tsuki-Geri (basis, only Gedan-barai)
Shihō (Week-)Tsuki-Geri Godan-Uke (five defenses)
Shihō Nuki
Shihō Empi
Shihō Kuzushi
Shihō Yaburi